The Mysterious Pelican of Rhodes 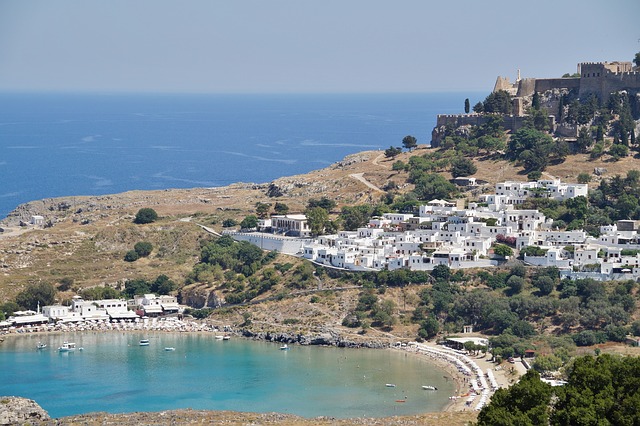 When I was a young man, my perception of what was real and possible in the universe was based on the premise that “facts” and “logic” were the cornerstones of what was widely acknowledged as “reality”. I adhered to this misconceived notion unquestionably, not realizing that there is indeed magic in the world, and that we often only have to be in the right place, at the right time to discover it.

My concept of reality was about to change forever on the enchanting island of Rhodes, Greece. Rhodes is replete with mystery, as it was once home to one of the Seven Wonders of the World, the Colossus of Rhodes, a huge bronze statue erected in 280 BC, which at over 30 meters tall, stood majestically guarding the harbor.

It was within this mythical setting that I found myself with my traveling buddy and good friend Wendell. Wendell and I had been traversing throughout Europe for several months, and had ventured to Rhodes with the intention of viewing the spot where the famous statue had once stood. We were captivated by the beauty and allure of the island, and intrigued by the inexplicable feeling in the air that this was a place where anything could happen.

As we leisurely strolled through the old section of town one sunny afternoon, we suddenly heard a loud and powerful flapping of wings directly overhead. We glanced up, and were astonished by the presence of the largest pelican we had ever seen. To our amazement the pelican gracefully glided to a landing directly in front of us.

We stood silently gaping at the bird, flabbergasted. The pelican then began walking down the sidewalk intently, as if it had an explicit destination in mind. We quickly followed at a safe distance to ensure that we didn't deter it from its goal.

It was a hot summer day, and as was the custom on the island, shops lining the street had their doors open to welcome visitors, and to allow the refreshing sea breeze to enter the premises.

The pelican continued walking, and then paused briefly before suddenly entering a local pharmacy. We eagerly followed it inside, where a handful of customers were browsing casually.

Without hesitation the pelican walked past the mystified patrons to an adjoining back room of the shop, where he began pacing back and forth in front of shelves which stored an array of medicine, as if searching for a particular item. We all stood transfixed, watching the bizarre behavior of this strange creature. After a few moments he seemed to abandon his peculiar quest, and reentered the interior of the shop.

We waited expectantly for what would happen next. To our surprise he then stopped within the center of our small group, and in turn looked at each of us directly in our eyes, as if trying to convey some personal message.

I remember his eyes seemed eerily human, and a strange sensation came over me that he was in actuality not a pelican, but rather an apparition which had temporarily taken form as this curious bird.

Without further ado he then left the shop as abruptly as he had entered, took a few steps toward the street, and flew away. We gazed at each other in wide-eyed disbelief, seeking validation from one another that what we had witnessed really transpired. Though a few token suggestions were offered, no one had a plausible explanation of what the pelican was doing there or why.

As I look back on my life I'm able to recall many extraordinary events which I'll forever cherish, but none as full of joyful spontaneity as the remarkable day we encountered the mysterious pelican of Rhodes.